Today is not only the first day of Spring but Ronnie’s birthday.

Despite my best efforts Ronnie has cleverly managed to remain a couple of years younger than me but even so I reckon he is ripe for some sort of mid-life crisis. To enable full expression of such crisis I bought him The Parkour and Freerunning Handook by Dan Edwardes which is not only endorsed by Parkour Generations but promises ‘everything you need to become part of this urban revolution’. Just to balance things out I also bought him The Cloudspotters Guide by Gavin Pretor-Pinney which he’ll be able to enjoy when he is lying flat on his back with a slipped disc from his parkour exploits. The Cloudspotters Guide is an official publication of the Cloud Appreciation Society you’ll be pleased to know and no less a rag then the Sunday Observer assures us that “cloudspotting: its the new religion“.

Jacob gave his Dad this T-shirt featuring one of his best ever drawings, Happy Man, with which his Dad was also best pleased.

*Update. And for more inspiration, here is some nice parkour just down from Ronnie’s work! 😉

Last year Jacob enlivened one particularly memorable Friday evening for me by casually mentioning at about 5.45pm that he had put a small stone up his nose. At lunchtime.

Jacob’s dad was en route from Perth at the time so Jacob and I spent a particularly nightmarish evening at the Emergency department of the Royal Children’s Hospital. Jacob can fall out off a tree from six metres up with a loud -splat- without batting an eyelid but show him a petite nurse armed with a torch and the big man turns into a screaming banshee. No amount of explanation, reasurance or bribery can overcome the sheer terror coursing through his veins.

And so, when his prep teacher rang me last Friday afternoon to tell me that Jacob had swallowed a stainless steel ball I have to admit my first thought was not “Will he be alright?”, but “Will we have to go to hospital?”

Luckily it seems we may not have to go down that path. The ball is a size, shape and smoothness that is unlikely to cause trouble. So far all the signs are good and the worst thing to come out of this new adventure is that we have spent an inordinate amount of time this last weekend poking around in poo. Whenever it becomes too much, I just remind myself of the alternative. 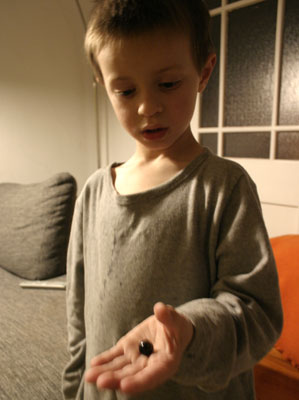 Jacob’s inner Virgo has never been far from the surface. This is a boy whose idea of a good time is to join his Dad down on the floorboards with a damp cloth for a bit of spot-cleaning. He never stood a chance really, not only was he born a Virgo himself but both his parents are Virgos. Doomed by accidents of both birth and genetics.

Virgo-Jacob took over yesterday. I simply wanted to issue a quick reminder of the things he needs to have in his school bag in case of inclement weather but was interrupted when Jacob suggested we make a list. No, three lists. One for sunny weather, one for cold weather and one for wet weather. Do I smell a future bureaucrat in the house?

Jacob then proceeded to find three pieces of paper,and draw an appropriate picture on each before demanding I write the list of requirements below each picture. The lists then had to be placed on the fridge where he can see them each morning.

And what does he need in his school bag for days like these? Here is the official ‘rainy-day’ list;

-beanie for under his bicycle helmet

-raincoat for on top of his jacket

-plastic bag for placing over bicycle seat when its locked up in the rain. (Don’t say I didn’t learn anything from the Dutch!)

Four bionicles appear on all lists. Apparently, Joel, Douglas, Charlie and Jacob need bionicles to play with at school in all weather.