There’s a gorgeous house nestled amongst birch trees in the foothills of Mt Annupuri, Niseko, Hokkaido, Japan. In winter there is sixteen metres of powdery snow each year, in summer and autumn the wind rustles the leaves and the red farmhouse rooves glow in landscapes you’ll know from Miyazaki films. Totoro is around every corner. No matter what time of year it is, the food is amazing.

Luckily for us we now own this house, we’ve started Japanese lessons and are looking forward to spending a lot more time in Japan over the next few years. But we can’t be there all the time.

If you think you might enjoy a holiday in rural Japan, either to explore the eight local ski resorts, cycle the Niseko Classic route, hike in the forests or raft on the rivers, then signing up for our newsletter will make sure you always know what’s going on in Niseko. We’re not planning on sending out heaps of newsletters, we’re hoping to be too busy actually being in Niseko to send out news about it, but occasionally we’ll send you a reminder of what’s going on, just in case you want to factor renting our house into your holidays. You can find more details about the house here or like our Facebook page if you’re that way inclined. 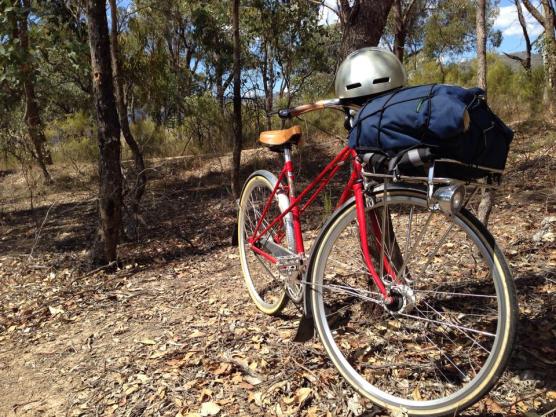 The Great Victorian Rail Trail is 120-ish kms of connected off road riding running from Tallarook to Mansfield via Yea and Yarck. With towns spaced at quite small distances along it, often twenty or thirty kms (sometimes less) it makes a great trail to try with kids, or even just to ride yourself when you really can’t be fussed doing much planning or carrying.

(I’m writing a much more detailed breakdown of the trip which you can download if you’re interested in the logistics. Check back for an update in a week or so)

But for now, lets focus on the sunshine, the devonshire teas, the cold beers, the flat tyres, the best spaghetti, the coffee, glorious days outdoors and the simplicity of getting up everyday and only having to ride.

Briefly, we rode from Tallarook to Yea, Yea to Yarck and then Yarck to Bonnie Doon over three days. We abandoned the last stage to Mansfield as we discovered the Flipster’s limitations over the first few days.

We discovered the Flipster can average 30-35kms per day and still enjoy the ride, that, with stops, you need to plan for an average of 10kms per hour, and that it helps if you get up early and ride your daily thirty-ish kms before midday and the 30+ temperatures.

We also discovered that it is possible to ride excruciatingly slow up a large hill, the Merton Gap, with a whingy ten year old and have all forgotten about it by the time you spin down the other side.

We didn’t want to be bothered carrying stuff so took one change of clothes each carried in one bag that the Dutchman and I took turns in carrying. We ate all of our meals at pubs, cafes and general stores. Because of the relatively small distances between towns this was easy and meant we didn’t have to worry about carrying food etc. It was our version of credit card touring.

We rode our city bikes; a single-speed Surly Steamroller, an eight speed custom built commuter and the Flipster’s first road bike. All had their usual city tyres.

We stayed at the Yea Motel and the Yarck Pub, having made reservations beforehand, since it was a long weekend. Both were pretty basic, well actually the pub was extremely basic, but fine for one night and had excellent food!

And at the end of our ride we called Mark Spencer of  Rail Trail Bike Tours to come and pick us up and take us and our bikes back to our car at Tallarook. But not before having a beer.

If you’d like to hear what the Flipster thought about it check out this podcast. 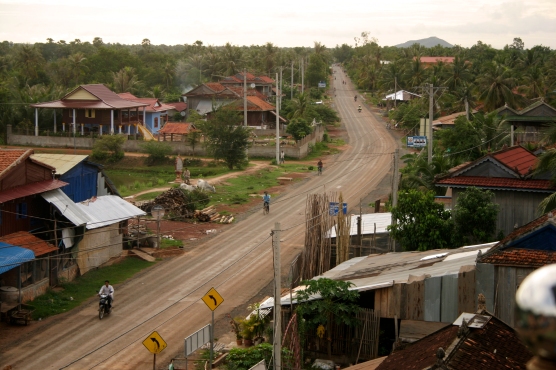 Phnom Penh. Like many south-east asian cities, traffic there is possessed of its own particular logic, at first invisible to western eyes. Given a day or two the apparent chaos resolves and it all starts making sense. The riders salmoning against the traffic aren’t mad, it is in fact safer than trying to cross the road to ride on the ‘right’ side. And no one is giving way to anyone, but they’re not going to run into them either. Much.

There is no aggression, just a slow insistent persistence. Riding there is a matter of letting go of what you know about how traffic should behave and trying to find the sweet spot of local traffic mores. Using the back streets is easy and you may, briefly, think you’ve got it all worked out. But eventually you will need to cross a major road and no matter how much you’ve relaxed and decided to go with the flow, it will test your nerve.

Not that being a pedestrian is any better. This is not a city where as a rider you can resort to the pedestrian infrastructure to help you get around. In fact, pedestrians are often forced to walk on the road amidst heavy traffic.

The congestion in Phnom Penh is phenomenal. Gridlock is achieved at the slightest mishap. If all the motos and bikes you see were replaced by cars no one would be going anywhere. On the other hand, it is still very easy to imagine what a lovely city it must have been when all those motos were bicycles.

Riding in the country, as in most countries, is very different. While motos abound bikes are still prevalent and at least on the small roads between villages, you’ll be able to ride and only rarely come across anything bigger than a moto. We spent days in a village, where the tiny rutted roads were traversed on old battered bikes. Mornings saw streams of white shirted school students riding to local schools. Kids as young as four or five rode, and walked, independently. To schools, the neighbours, the shops, or for no reason at all. The local town had a couple of thriving bike shops.

The road toll in Cambodia is horrific. And 90% of casualties are moto riders, pedestrians and bike riders. Unfortunately, as the standard of living in Cambodia improves, motos and cars will continue to replace the bicycle. With a moto many villagers living outside of Phnom Penh can get there within a few hours, they can’t do that on a bicycle. What is apparent in Cambodia is that there is only minimal spending on infrastructure. Of any kind. Often when you do come across a road with a decent surface it is only to learn that it was funded by aid, or the Chinese, in conjunction with one of their new factories.

And the few projects of this type that you do see never, ever include provision for riders. Roads are surfaced so that cars can travel faster. Riders on those roads are pushed to the margins by the speed of the cars and the ‘safer’ road makes it more dangerous to travel by bike. Kind of sad to see it happening before your eyes. If you’re interested in riding in Cambodia check out The Weekly Cycle. He spent a year living there with his bike.

The Flipster and I are hoping to do some more riding in Cambodia. Next time we’ll take The Dutchman with us. I don’t whether I’ll let Flip ride in Phnom Penh, although young children riding in the traffic there are common, but I think we could all find some riding in the country side that we could enjoy. We’ll be looking forward to it, thats for sure!