The Flipster has well and truly outgrown his old bike. His attempts to keep pace as we get around town together have recently become more and more laboured, his legs now so long that his knees frequently crash into his elbows. We had planned to get him a 20″ bicycle for his birthday but growth spurts have no respect for birthdays. With our bicycles as our primary means of getting around The Flipster needs one that he can ride in comfort.

Just over a week ago we dropped in at Velo where The Flipster took one of the BYK bikes for a test run on the Park St Freeway. We love these bikes. They’re designed to fit kids rather than being a miniature adult bike. I especially like the difference in their weight. For a kid who gets to 90% of where he needs to be by bicycle this and the greater efficiency make a huge difference.

The Flipster fell in love after his test drive and is especially enamoured of his ‘skinny’ wheels. Velo staff did a great job of fitting the bicycle to him, making adjustments for his long arms. He has been literally glowing all week as he rides to school and back,taking every opportunity to tell everyone about his new bike. For my part, I’m enjoying not having to cycle at a snail’s pace while he pedals like mad to try and keep up!

On a less practical note, a while ago I found a Cyclops Dodger at The Junk Company. I couldn’t resist buying it and after some basic work replacing cables, tyres and tubes it too was ready this week for The Flipster. With 12″ wheels and only a front wheel brake it is certainly not built for getting very far but it sure does look great getting there. Initially The Flipster found the low seat, the overly-excitable steering and the life-threatening brakes a bit daunting but soon got used to them, mastering the art of ‘cruising’ in no time. If he can just remember not to swing his leg over the sissy bar when dismounting he may just survive the Cyclops! 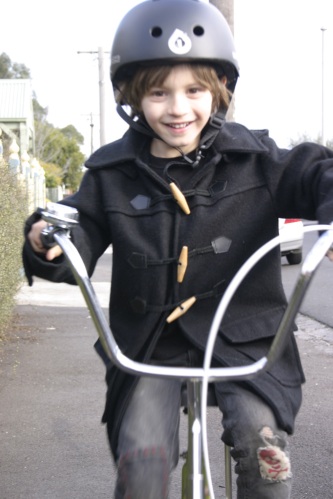 The Flipster’s old bike went to a new home on Saturday with some friends whose little boy was ready for bicycle-up-sizing. It immediately took him and his family to the Brusnwick veledrome, one of The Flipster’s favourite haunts, for a few introductory laps.

Stay tuned for more exciting bicycle news as the Dutchman tosses up between a fixie and a single-geared bicycle for his daily commute. If you’re a regular pedestrian in Swanston St during peak hour you may want to register your vote in the comments below!

5 thoughts on “of bicycles and things”