Once again, too busy to blog. Its not a dearth of things to blog about but rather too many, and of course, once you’re out of the habit its hard to get back in. In December I will have been blogging ten years. I don’t know that I’ve stuck at anything else that long, except the Dutchman! 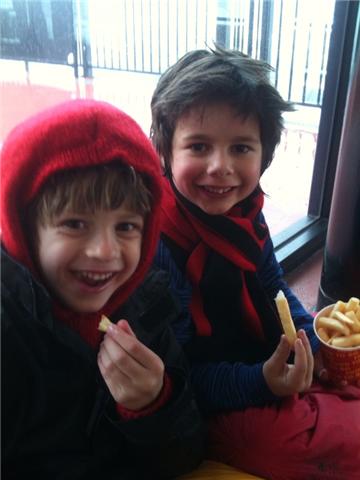 Yesterday the the Flipster had a day off school so we went up to Lake Mountain with some of his friends and their parents. It was one off those fabulous days where driving rain couldn’t dampen anyone’s enthusiasm and nice as well to show it off to the Dutchman. No, its not the French Alps, but the French Alps are a ten hour drive and a week’s holiday away from Amsterdam. Having something like Lake Mountain at your doorstep is another one of those special things about Melbourne. This was borne out by one of The Flipster’s friends whose weekend was going to consist of both a trip to an alpine resort, (ahem, …. yes I know, but technically it’s true and Buller is also within day trip range) and a trip to the beach. Surf and Turf.